On June the 3rd, Lesley Foden set off on a round Britain Row. Lesley is from  Newbury in Berkshire, and is 60 years old. She is undertaking the row of 1800 miles to inspire older people to exercise, raise awareness of plastic pollution in the seas and to raise funds for Lifeboats. A keen supporter of Sea-Changers and the work we do to support UK marine conservation, Lesley made time just before she set off to tell us about her row. 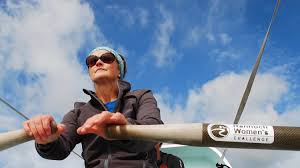 Lesley, tell us about your rowing adventure?

The row is the circum-navigation of Britain starting on 3 June. It's organised by Rannoch Adventure. They build ocean rowing boats and renovate them. The person who is organising this row is Angus Collins. Angus has been in the winning crew of the last two Talisker Whisky Cross Atlantic Challenges. He has lots of experience which is why I am happy to put myself in his hands.

The row goes around Britain and takes eight weeks weather permitting. We come ashore once a week to change crew because most people involved are only doing a week or maybe two. Hence you need to come aboard once a week to swap over. I however I'm going all the way around.

During the week we are rowing it is around the clock rowing, 24 hours a day. We don't stop. The shift pattern is two hours on, two hours off. That may change, depending on conditions. During your time off you are not just sat there doing nothing. You have to take care of your needs, take care of feeding yourself, maybe preparing food for others, making sure everyone else is okay, navigating, steering, chart plotting, making sure we are on course and just generally keeping a lookout. I haven't worked out how it's going to happen yet but I'm sure system will fall into place.

Why are you taking on such a massive challenge?

It started out as a bit of an idea for attention but like all these things you soon think well actually, if I'm going to all this effort I'll make it count for something. Rannoch are raising money for RNLI, which of course I support. To me the environment is very important and I thought marine plastic pollution was a massive issue which is why I am concentrating on that, to raise awareness.

There are a lot of personal reasons why I wanted to do the row. Some of them I thought about beforehand such as showing my daughter, who is 19, that it's possible to make something happen, no matter how crazy, just keep going and if you fail it won't be because you've given up, it will be because somethings stopped you and that's fine. Some reasons have become apparent as I've gone along, learning about me, what makes me tick, what I find hard.

Hopefully seeing all the wildlife, seeing plastic. I'll be taking along a bird ID book and a marine life book. When we arrived two or three weeks ago we saw what we thought was a piece of paper floating up near the surface but it was a flounder to come up to eat. We saw lots of seals. I'm also looking forward to such a different perspective. I'm going to feel so privileged to be able to look at our island from the outside all the way around, to know I am out there looking in. Hopefully it won't be scary.

One of the things I'm going to find hardest is the psychological side of being on a small boat with four other people. No chance of escape for a week at a time. I think I'll be really ready to get off the boat at the end of that week even if it’s only for half an hour.

Will you get a chance to speak to your family as you go along?

We will have mobile phones on board. My husband is going to try to join me at at least four stops which will be great. We also have friends who have a boat and they are going to sail around with my husband and daughter to try and find us in Scotland.

I think I will probably get quite homesick for a few days just been thrown into a totally alien environment so I'm stealing myself for feeling absolutely at sea. I think once the first week is over I'll be able to start to breathe again but I'm looking forward to that moment when I'm sitting there rowing, navigating, when I'm not panicking about this. I'm doing it and I'm understanding it and I'm surviving.

Tell me more about Marine Plastics?

Plastics really are a major thing and the stats are really terrifying. I feel very passionate that I'm going to carry on with this course for ever, it's become a major thing for me, not just sea plastics but plastic in general because, of course, a lot of plastic in the ocean starts on the land.

One of the images that sticks in my mind is an albatross chick that was found half decayed with plastic sticking out of it. Someone created and arranged all the pieces of plastic on a large black background and there were 276 pieces and that's nothing. That’s happening to so much marine life and that's what we see. I think it's the tip of the iceberg. There's got to be so much more under the surface and it's got to be effecting us. It has to be effecting our health. It's certainly effecting the quality and quantity of fishing stocks. What are we eating now? We are eating what we thrown. Plastics got to stop. A lot of people are talking about it now, it's gaining traction and there is a ground swell. A lot more impetus now it's coming from companies rather than just individuals, global companies are now looking at it and once they have made the move we all will. It's so encouraging. From my first reading about plastic pollution I've become hooked.

You can read more about Lesley’s Row and track her progress here.

All at Sea-Changers wish Lesley lots of luck in her adventures and we look forward to hearing all about it on her return.
Posted by Sea-Changer at 03:16